Queers in Search of Refuge 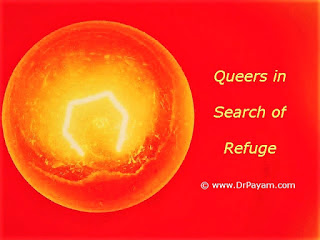 In the dark corners of this planet, there are places that innocent people get executed for their same sex attraction or living the life that matches their true gender identity. There are many of us who managed to escape from such terrifying places. As LGBTQ people wander on a long journey in search of a refuge, many have found the United States as the answer to freedom. This country gave us a chance to live life with dignity along with the hope for a brighter future. The freedom to marry the person we love which became possible during the Obama administration gave many of us the chance to form families. Perhaps gay Americans who left their small towns for a more tolerant metropolitan city might relate to an immigrant who left his or her country for a freer society. It is possible we are more similar than different.


Those of us who found America a safe place for asylum are now starting to feel unsafe again.  The rise of xenophobia and the threat of losing hard-fought LGBTQ rights are now becoming a new source of concern. Growing acts of violence toward LGBTQ people and immigrants in general have been reported in many parts of the country. LGBTQ refugees and immigrants who have a history of trauma are more vulnerable to anxiety and depression when they experience mistreatment due to homophobia or xenophobia. Protecting such a vulnerable population from violence is important. They have unique psychological needs, and they are dealing with the added complexity of being a minority within a minority.


Given many refugees have lived under authoritarian regimes before coming to America, they are often familiar with how these oppressive regimes operate. I am familiar with them as well. Such regimes often come to power without the support of most people or through lies and offering empty promises. Once in power, oppressive regimes tend to manufacture a national security crisis by starting a war or creating hysteria about a terrorist attack, which throws people into a frenzy. People tend to rally around whoever is in power during a national security crisis, and this is how oppressive regimes can gain legitimacy. These manufactured situations give them excuses to oppress their opponents and even try to “lock her up” for unsubstantiated claims. To maintain power, some authoritarian regimes use military force to stop people protesting. Finally, by mindless reality TV shows and shallow news programs, they can keep people unaware and distracted from what is really happening to their country.


Undemocratic regimes extend beyond external oppression and continue into our inner world, eating away our human spirit. The creation of a culture of unconsciousness causes many people to be cut off from their soul and their connection to the inner world. People enter a state of participation mystique and lose their sense of individual self. Authoritarian regimes take secret delight in knowing that most people are sleeping walking through their political destiny and don’t know what is really happening to them.


Many psycho-spiritually aware people know that authoritarian dark forces aim to spread hatred and prejudice by absorbing the light of our democracy. We can turn to our own individual light of consciousness and witness what is happening. Within our heart of hearts, there is a sacred place that dictators cannot touch. Our activism starts by journeying into that sacred space. We go deeper and deeper into the heart and embrace love. The love for America coupled with our passion to care for Mother Earth vibrates above the forces of archetypal evil. We don’t clash with darkness. We simply let the power of love rise us above it. We broaden our focus beyond the unjust political situations by embracing what is sacred in the inner world and honor its reflection on the outer world. Through our experience of the numinous, we can create a container for arrival of a new archetypal energy that can change the world for the better. This is how we become spiritual warriors. This is how we don’t get entangled in “good versus evil.”

Many foreign-born LGBTQ people who live in America as an immigrants or refugees know that there is a deeper purpose for our existence. Some of us are summoned to keep America accountable to its promise of liberty by pointing out that the emperor is in fact naked whenever America begins to abandon its true values. Not only as Americans but as citizens of the planet Earth we can come together and protect one another during the rise of archetypal evil. Not only America, but this whole world is a living being, endowed with a soul (Anima Mundi) and intelligence, in need of love.


Finally, as LGBTQ people, our next journey of immigration needs to happen on the inner plane. We can resort to our psychic refuge by walking through our inner labyrinth and access inner light of consciousness to stay present. Such inner journey is open to everyone, regardless of one’s nationality, who is seeking refuge during such uncertain times in America.