My Coming Out , A Journey Held by the Earth

There was a time I was struggling to make sense of being queer. I recall feeling shame for being different. It was a lonely and confusing period not being able to “act straight” and flow with the mainstream. At the time, I needed a refuge from my oppressive homophobic environment. Sometimes, I escaped into the safety of my imagination, and I saw myself as a river on a sacred land. As a river, I could move freely and flow into an ocean. The image of a flowing river felt liberating in my body, and it was a delightful contrast to feeling stuck in the closet of shame. I was too young to realize through such an image I was experiencing movement as an antidote to my oppression. I am grateful for the offerings of my imagination during such a painful period.

In my imagination, I often saw myself on a sacred ground. The concept of resorting to a sacred land was something I learned growing up. When faced with overwhelming feelings, some people in my family found peace by visiting sacred locations on the Earth. That is what my grandmother did. She traveled to Mecca after the loss of her husband to experience relief. The holy land made it easier for her to find solace. I thought about finding my version of a sacred land, a safe zone, free from judgment to locate my gay self and arrive at a place of self-acceptance.

The place that eventually offered me a refuge, and connection with other queer people was not in Mecca. It was a dance floor inside a gay bar. For an isolated gay youth starved for love and struggling to breath air that was not contaminated by homophobia, a  dance floor was his sacred site. I felt safe there. Living in a world that is tainted by racism, sexism, homophobia, transphobia, and xenophobia, any place that offers a sense of safety for marginalized people is sacred. In today’s perilous world, such a feeling  is sacrosanct. In June of 2016 when I heard about a mass shooting inside Pulse, a gay nightclub in Orlando, Florida, I felt devastated for those innocent queer souls who lost their lives. Perhaps many of them were there to find safety and connection just like I had done when I was in their age.

My coming out was not only an inner journey of embracing my gay essence, but also a journey that is held by the Earth. At the time, I did not have the understanding that the Earth held space for me to come out. All the resources that helped me make sense of being queer were located on the surface of the Earth. For example, a coming out group, a dance club, a psychotherapy office, a gay Pride Parade, the LGBT Center, and the local gay bookstore can all be considered sacred locations. Any location that one’s authentic self emerges becomes blessed with a powerful transformational energy. The Earth has been a host to countless, meaningful, and transformational experiences which has contributed to the sacred nature of the Earth.

The Earth needs to be included in my coming out story because I am never separate from her. In fact, my body is made up of elements that belongs to the Earth. Given the current consumeristic mentality and the ecological crisis, I welcome any opportunity to bring awareness to “the cry of the Earth.” We can no longer live life unconsciously, given how much we know about the state of the planet. It makes me feel sad to witness humanity replacing fish in the oceans with plastic, rivers with nuclear waste, forests with urban housing, clean air with pollution,  and turning the ecosystem into a garbage bin. As I painfully witness ecocide on Earth, I feel the urgency to respond to her cry.

My coming out story is part of the larger story of humanity’s movement toward love and liberation. We all want freedom to love. It hurts deeply to shame a human being for such a natural desire. Throughout human history and in most places on the Earth, countless numbers of innocent LGBT people have lost their lives through hateful acts; therefore, I consider the Earth as one giant shrine. The Earth has been witnessing humanity’s story, and I witness her mistreatment and exploitation of her natural resources.

As a gay man, I honor my gay ancestors who had strong bonds with all life on Earth. As a LGBTQ community, I hope we relate to the Earth as our shaman ancestors did. Our survival depends on treating the planet as a sacred being in need of love. As the Earth’s holocaust is taking place, we as queer people can play a major role in stopping it. The LGBTQ community suffered their own version of a holocaust when the AIDS crisis took many lives of our people. Triumphs like the way we took care of our dying people during this crisis, and how far we have come in our struggle for equal rights are truly a reflection of how courageous we are as a community. Our courage can continue to stop forces of greed that are destroying our echo system. There's still time to love the Earth back to health. 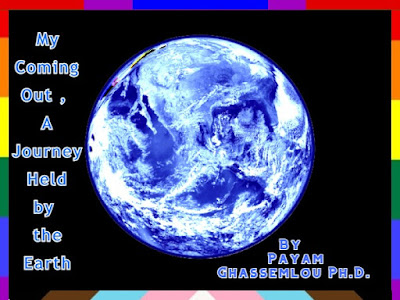 Posted by Payam Ghassemlou MFT, Ph.D. at 3:38 PM No comments: