A Somatic Perspective on the Trauma of Growing up Gay by Payam Ghassemlou MFT, Ph.D. 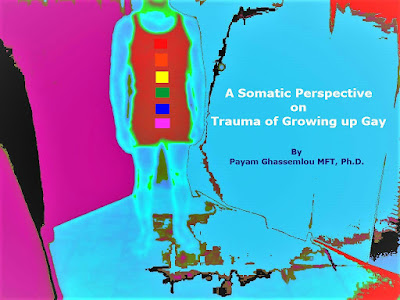 Listen to this article
For almost three decades, I have immersed myself in the life stories of many people of the LGBTQ community who had painful homophobic and transphobic upbringings. Many of the gay men’s personal narratives that I have heard are not very different from my own. Regardless of national origin, we are part of a tribe with similar stories of growing up in a homophobic and heterosexist world where our gayness was repeatedly assaulted. We are everywhere, and unfortunately so is homophobia.


Many gay men have shared with me that as long they could recall they always felt different. They were unable to articulate why they felt that way, and, at the same time, they did not feel safe to talk about it. Some knew this feeling of being different was related to something forbidden. “It felt like keeping an ugly secret that I could not even understand,” described one person. Other gay men have disclosed to me that this feeling revealed itself in the form of gender nonconformity, which could not be kept secret. Therefore, it made them more vulnerable to homophobic mistreatment at school and often at home. Gay men of color reported even worse experiences due to the additional stress of racism and racial bullying.


Many school-age children organize their school experiences around the notion of not coming across as different, in particular, queer. Any school-age child’s worst nightmare is being labeled faggot, which was commonly experienced by many gay individuals who did not flow with the mainstream. Educational institutions felt like a scary place for many of them who were scapegoated as queer growing up. Therefore, they had to cope with a daily assault of shame and humiliation without any support. This is a form of child abuse on a collective level, and it needs to stop.


So much has been written about the devastating impact of homophobia on gay people’s psychological functioning but not enough on the biological impact of it. It is important to understand how repeated hateful acts toward gay youngsters can impact the way their bodies and minds function, including the functioning of their nervous system. Unfortunately, this also applies to any child who is a target of hate and abuse. As Peter Levine, the founder of Somatic Experiencing, stated, “Trauma is not in the event, but in the nervous system.” Based on my personal and clinical work, I also concur that trauma becomes embodied during a person's life and can affect the working of the autonomic nervous system (“ANS”). Much of the healing from this trauma needs to happen through the body. In particular, the nervous system needs to be regulated.


The ANS is the part of the nervous system that governs the fight, flight, or freeze instinct and  is responsible for the unconscious bodily functions like breathing, digesting food, and regulating the heart rate. It also plays an important role of supplying information from our organs to our brain. The ANS can become dysregulated due to the thwarted responses of fight, flight, or freeze in the aftermath of trauma.


The ANS is central to our experience of safety, connection with others, and our ability to bounce back from life’s overwhelming experiences. This ability to recover defines resilience and requires the help of our ANS to keep us in our “window of tolerance”, which has been defined in the book Nurturing Resilience by trauma specialists Kathy Kain and Stephen Terrell “as the zone where we effectively process environmental signals without becoming too reactive or too withdrawn, given the circumstances.” The window of tolerance as a frame work is very helpful to understand where we feel safe, unsafe, and how to expand our optimal arousal zone.


Stephen Porges’, Bessel van der Kolk’s, and Peter Levine’s research and writings have significantly reworked my understanding of how the nervous system responds to threat and trauma. Drawing from their work and my decades of experience, it is my understanding the ongoing stress from homophobia can activate a youngster’s nervous system and “unresolved activation will be stored in the body as bound energy and manifest as trauma symptoms.” In other words, under a daily homophobic assault, a child’s sympathetic system (“stress response” or “fight or flight” response) gets overly activated. Often during such stressful situations, neither fighting nor fleeing can resolve the overwhelming situation, and the thwarted or incomplete fight and flight responses can become “trapped” within the body and dysregulate the nervous system. Such a dysregulated nervous system is more likely to get stuck on “high” or hyper-arousal. Anxiety, panic attacks, rage, hyperactivity, mania, hypervigilance, sleeplessness, exaggerated startle response, digestive problems, and many other symptoms are the result of a dysregulated nervous system that is stuck on “high” or hyper-arousal.


According to many studies, gay individuals who experienced homophobic related stress showed increased production of the stress hormone cortisol compared to peers in safer environments.  This experience of being stuck on “high” continuously activates a person’s stress response system, which leads to the release of stress hormones. Research in this area has shown overexposure to cortisol and other stress hormones leads to numerous health problem including headaches, oversensitivity to touch or sound, weight gain, heart disease, concentration impairment, and sleep disturbance.


On the other hand, there are gay men whose nervous systems are stuck on “low” or hypo-arousal, which can result from being terrorized growing up with no hope of protection. Faced with isolation, confusion, physical violence, not being valued, and carrying a secret that the youngster connects with something terrible and unthinkable is too stressful for any child to endure, especially when there is no empathic other to help him sort it out. Such experience is often beyond the youngster’s “window of tolerance.”  This is when the dorsal vagus can shut down the entire system, and the mistreated youngster can go into freeze. In other words, the youngster suffers in silence with numbness or dissociation as his only available survival mechanism.


Stephen Porges, the founder of Polyvagal Theory, has expanded our view of the vagus nerve, one of the largest nerves in the body and a major part of the Parasympathetic system. The word “vagus” means wandering in Latin. The dorsal vagus is a branch of the vagus nerve which is a much older part of the nervous system. Dorsal vagus regulates organs below the diaphragm. Dorsal vagus is instrumental in activating the “shutdown” of the body as discussed in cases of overwhelming fear which can result from homophobic mistreatment. This automatic survival mechanism can become a long-standing pattern of how individuals might cope with fear and stress in life. For example, people whose nervous system is stuck on “low” or hypo-arousal when faced with life stresses can default to shutting down, disassociation, chronic isolation, detachment, numbness, and suicidal thoughts.


In my counseling work, I have noticed when the nervous system gets stuck on freeze, when numbness and detachment become a gay man’s dominant state, he is more likely to engage in risky behaviors as a temporary relief from inner deadness. Thrill seeking behaviors such as sexual acting out, excessive gambling, and crystal meth (crystal methamphetamine) use are ways some gay men escape the emotional flatness that results from experiencing the hypo-arousal state. The same behaviors can also be used to cope with ongoing activation of the fight or flight response. One person might turn to substance abuse to escape his inner deadness and another person might use it to dampen his anxiety that often results from being stuck in a state of hyper-arousal.


As Peter Levine stated, “Trauma is a fact of life. It does not, however, have to be a life sentence.”  For those of us who have had painful struggles with homophobia, life after the closet needs to include dealing with memories of homophobic mistreatment that can lie dormant in our body. Recovery from it needs to start with resourcing and then progressing to completing the thwarted responses of fight, flight, or freeze. Such healing can reset the nervous system and restore inner balance. In Body Keeps the Score, Dr. Bessel van der Kolk writes about a body-centered approach to healing which allows “the body to have experiences that deeply and viscerally contradict the helplessness, rage, or collapse that result from trauma.”


How far the LGBTQ community has come in our struggle for equal rights reflects how brave we are as a community. Our bravery can continue by facing traumas we experienced growing up in oppressive environments that did not nurture our true essence. Not every LGBTQ person felt traumatized growing up, but those who did can benefit from the vitality and the sense of liberation that comes with incorporating somatic work as part of the healing process.


The Somatic Experiencing Trauma Institute offers trainings and seminars on the biology of traumatic stress reactions including tools on how to bring the body-mind-spirit back into balance. Participating in their trainings has enhanced my ability to help others who are interested to tap into the wisdom of their bodies for healing and growth.  There are many other institutes that offer body-centered approaches toward healing which reflect the increased popularity of such work.

I have been deeply inspired by your work on LGBTQ+ trauma resulting from growing up in a homophobic/transphobic society, and have been looking for a way to get in touch with you. I am a nonbinary, bisexual and indigenous prospective PhD student and am interested in studying the intersection of LGBTQ trauma and indigenous identity. I have found very little scholarly work that addresses these experiences as trauma in the way that yours does, and was wondering if you might know of any similar work being done.

Hi,
Thanks for your post. I am not aware of any published scholarly work on the top. You might want to contact The Somatic Experiencing Trauma Institute https://traumahealing.org/ , and their facebook affiliates. They might be able to point you to the right people.
Best of luck to you, and thank you for the valuable work you are doing.