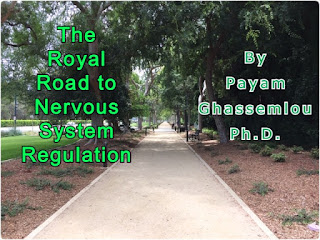 Many years ago, my husband and I worked on a small movie project that involved reshooting and editing some of the scenes. Inspired by that experience, I view life as a movie with the opportunity to reshoot and edit some of the upsetting or disappointing scenes. The editing tool is our imagination. Life experiences can consist of traumatic or tragic scenes, but we don't have to live in the shadow of our tragedies. As Peter Levine, the founder of Somatic Experiencing stated, "Trauma is a fact of life, but it doesn't have to be a life sentence."


With the help of our imagination, we can come up with an alternative to any unsettling life experience. Since these events impact the nervous system, the most important part of this work is noticing how the body responds to the new take along with the bodily sensations that can arise. Noticing how our body responds to a positive replica of an event can help embody a new relationship to the original experience. Many of us have heard how changing our thinking about a situation can impact the intensity of it. This is a similar concept except we work with the imagination along with the inner sensations and any unresolved excess energy within the nervous system. Stephen Porges’, Bessel van der Kolk’s, and Peter Levine’s research and writings have significantly reworked my understanding of how the nervous system responds to threat and trauma. As a result of studying their work, I have gained more respect for the body especially the autonomic nervous system (ANS).


Since our life tragedies live in the body, they can be experienced as unpleasant sensations. For example, it is not uncommon for people with unhealed trauma to experience sensations such as tightness, freezing, heaviness, tension, shaking or others in their body. Some people that I have worked with have reported the bodily experience of “spacious” in the chest area or a sense of vitality after modifying the original unpleasant event in their imagination. Through my training in Somatic Experiencing, I have been learning about the importance of tracking bodily sensations that often come up during one’s healing journey. In general, this tracking involves paying attention to sensations within the nervous system and distinguishing between pleasant and unpleasant ones. In my experience, the more we bring pleasant sensations to our focus, the more regulated our nervous system can become. Using the imagination to take bad memories and form something new along with embracing pleasant sensations is the royal road to regulating our nervous system.


It is important to note that using our imagination for healing purposes needs to be done with the help of a professional who has training in healing trauma. We need to make sure that there is a trained person available in case we become overwhelmed by the imagination and can't cut it off. Different approaches work for different people, and there is no one size fits all when it comes to therapy. It is empowering when we offer people choices regarding interventions and healing modalities.


When we use our imagination to edit some of the painful scenes in our history, we can experience more mastery over situations that we felt powerless at the time. Imagination as the Sufi mystic Inayat Khan explained “is the stream that feeds the fountain of your mind."  Many people do not tap into the current of this stream and nourish their mind and body with its healing energy. By using our imagination to rewrite some of our life events, we can become an active player and connect with abilities and potencies that we may not have experienced previously. Our imagination can also be utilized in any current situation where we experience powerlessness. We can use it to create a solution or coping strategy for any life challenges we encounter. As Bessel van der Kolk stated, “Imagination gives us the opportunity to envision new possibilities—it is an essential launchpad for making our hopes come true.”


One way of editing our life story is by choosing an unhappy scene from our experience, and just like a movie director, use our imagination and reshoot the scene. Most of our life events have a beginning, middle, and end. We can choose a segment and change the scene to how we wished it had happened. For some, changing the beginning of an event makes more sense and for others modifying the middle or the end feels better. How and what to modify with the intention of creating an alternative scene is a very personal decision.


I once worked with an actor who felt devastated after learning his part in a popular television series was suddenly cut. The producer ended his role by having him killed in one of the episodes. He felt incredibly sad for not being in that show anymore. Sharing and receiving empathy along with grieving for the loss of his role was helpful but not enough. He still had difficulty feeling confident to pursue his acting career. At some point in our work, I invited him to imagine a different take from what had happened. A scene that was completely opposite to the original painful experience. Before starting the re-imagining, I encouraged him to find a comfortable position and notice how his back was touching the couch. Bringing his awareness to sensations that were comfortable in his body helped him be in the present moment in a relaxed way. It is important to be grounded in the present moment when doing this work. While he was imagining a more pleasant alternative to his original devastating experience, he noticed his body became infused with a pleasant warm sensation along with a change in his breathing and a delightful smile appeared on his face. As he was sharing how the exercise was helping him not to feel stuck, he was making a movement with his hands that seemed meaningful. By inviting him to notice the movement, he realized talking about letting go of defeat led to opening of his clinched fist. As he was noticing the movement and slowing it down, he started to sense some tingling in his hands. Something began to change for him in that moment that words could not describe. As Carl Jung stated, "Often the hands know how to solve a riddle with which the intellect has wrestled in vain." In our follow up meeting, he reported feeling less bothered by the loss of his acting job and more relaxed in his body. He also felt more confident showing up for auditions.

Offering this approach to people has been very interesting. There is a level of unpredictability that makes the process adventurous. I never know how the person is going to re-imagine a scene or what the imagination is going to offer. For some people who are spiritually grounded, I have noticed they tend to receive an offering from their imagination in forms of helpful figures, guides or healing images. For example, one of the refugees from the Middle East who came to deal with his war trauma noticed the appearance of his beloved Sufi teacher who offered him a protective shield made of glowing light. Receiving the shield from his spiritual teacher gave him an “incredible sense of safety” that he had never experienced before. His body was mirroring his imaginal experience with a sense of calmness and relaxation. Having experienced war and other trauma, he often felt nervous in his body. His imagination became an important healing resource by offering him an experience that was in contradiction to the tension he often carried in his body. Every time he imagined the protective shield, he immediately felt safe.


Many people who talk about distressing life experiences in therapy are never given the opportunity to work with the experience in the arena of their imagination. The sky is the limit when it comes to using our imagination to work with any life scenarios. I recently met a gay man who felt traumatized growing up gay in a religious small town. All his past therapy consisted of sharing about his trauma and making the feelings associated with it more conscious. It was important and useful for him to address those feelings and have regard for them. He told me he was done addressing them. He wanted something different than talking about his trauma. Since he was very much into comic books growing up, he imagined one of his favorite comic book heroes rescuing him from this oppressive homophobic environment. The experience felt so real in his body. He had never experienced so much aliveness in a therapy session that involved dealing with his traumas of growing up gay in a homophobic and heterosexist world. For the first time in his life, he experienced the freedom to use his imagination for the purpose of changing what he could not change as a child. He was not in denial about the horror he experienced. For once in his life, he began to feel the opposite of the trauma. A safe therapeutic space can help people to imagine their painful history in a completely different way. Scenes can be added, deleted, modified with a different ending.


Our life traumas or tragedies are not just mental concepts. They are part of our bodily memories that can impact our nervous system. As Peter Levine stated, “Trauma is not in the event, but in the nervous system.” There are many paths toward healing those upsetting life experiences that has kept our nervous system dysregulated. By working with a licensed professional who has training in “body-inclusive therapy”, we can work on healing our nervous system from unresolved traumas. Our imagination can be a very powerful resource and an ally in this process. Trauma does not have to have the last word.