A great change is upon humanity. The Age of Aquarius which values social conscience combined with love and unity is replacing the Piscean Age of dualism, hierarchy, and power. No one knows exactly when each age begins or ends, but most experts seem to agree that humanity is in a very important transition period. Unprecedented change and upheaval can happen when Piscean values that have lasted for over two thousand years is taken down to make room for a new world. Perhaps the COVID-19 pandemic with its devastating impact on health and the economy is related to such a seismic shift.

This transition to a new age is gradual and has been in progress for a long time. The world will become a better place once the transition is completed, and humanity can celebrate the promises of the Aquarian Age. Such promises include peace on Earth, end of poverty, love and kindness, pure spiritual awareness, true democracy and more. Some of these promises are happening now as humanity is racing to combat the coronavirus with medical breakthroughs, along with caring for the sick and dying. The sacrifices of the frontline medical personnel and many essential workers reflects humanity’s  love and kindness.

Everyone has a role to play in welcoming the new energy of the Aquarian Age. It involves letting go of the illusion of materialism as the “secret” road toward fulfillment. Instead, embracing cooperation and humanitarianism is a part of this evolution of consciousness that is needed for this major change. Without a fundamental shift in consciousness and spiritual evolution, humanity won’t be able to move in the new direction. The pure spirituality associated with this new age is the innate knowing of the Divine’s love within one’s heart and not extreme religious ideology.

During such a challenging transition, pure spiritual leaders, along with trauma therapists, can play major roles in helping people. Spiritual leaders can  help humanity realize that this shift to a new era can become less chaotic when people stop worshipping money and power as their source of security. When the world economy is based on infinite expansion which leads to the depletion of the Earth’s resources, suffering is inevitable. Given the fact that economic expansion has resulted in replacing fish in the oceans with plastic,  forests with urban housing, clean air with pollution, and turning the ecosystem into a garbage bin, transformation to a new age is necessary. Spiritual leaders need to remind everyone that an outdated frame of reference to a past era won’t help  love the Earth back to health. It is time to welcome the dawning of the Age of Aquarius.

“The darkest hour is just before the dawn,” as humanity stands upon the cusp of the Piscean-Aquarian Age. They need to be prepared for disruptions that can happen before the completion of this major shift. As exciting as it sounds to move to a different era that can open the world to the splendor of a new life, the transformation might be intense and at times beyond  humanity’s “window of tolerance”. There might be more climate catastrophes, pandemics, mass shootings, political chaos, terrorism, wars, xenophobia, homophobia and other ugly phenomena. To be aware of what is happening allows everyone to prepare, and work in cooperation with this  energy of the new era. Crisis is not always about danger but also the opportunity to transform. Trauma therapists are more than ever needed to hold space and help people  recover from the intensity that is associated with this major transformation. They can play a vital role as the universal trauma holders and healers. Helping people to stay centered and grounded during a crisis is among the contributions that healers of any kind can offer.

Those of us who have spent decades helping traumatized people feel safe again know that trauma is a fact of life. Healing from any kind of injuries involves offering helpful resources for those in need of treatment. Since it is easy to feel helpless in the face of trauma, resource is power. One of the most accessible resources for anyone looking to grow, evolve, and/or heal beyond any traumatic experience is working with the body, in particular the nervous system. Healers who are trained to work with trauma can help people  become more resilient living in this transitional time by teaching them how to find safety within their bodies. As a recent example, a man who survived the AIDS crisis of the past century, and now recovering from a COVID-19 infection, shared during the peak of his illness, there was an episode in which breathing became very difficult to the point he thought he was going to die. It was a scary moment for him since he was living  alone at the time. He did not know if he was experiencing a panic attack, difficulty breathing due to COVID-19, or both. He reported what helped him  lessen the intensity of that terrifying moment so that he could call 911 was hearing a “gentle voice” of his therapist inside him inviting him to notice his feet, hands, and the felt sense of the support his body was experiencing lying on the bed. Perhaps, knowing how to track his pleasant sensations initiated a physiological event that resulted in helping him breathe a little easier until the paramedics arrived. How to track his bodily sensations was an important resource which he described as a “lifesaver.” Another woman, who was struggling with COVID-19, reported listening to calming music helped her chest  feel less tight and began to experience warm sensations flowing around her heart. Tracking her pleasant sensations improved her mood and her physical symptoms.

The COVID-19 pandemic has triggered many people’s survival mechanisms, and their nervous systems have become fixated in one or more processes. For some in a high sympathetic tone (fight/ flight) that can involve being restless, anxious, and for others in the state of  dorsal vagal response that might involve shutdown, freeze, and other acute stress response. Body-inclusive therapy offers  techniques that can help people in distress  shift their autonomic state that is stuck on FFF (fight/flight/freeze) toward safety and relaxation. Offering people resources to lower activation and regulate their nervous system is an example of the important roles trauma informed healers can play during the current pandemic or any crisis. “Body-inclusive” therapy is one approach that healers can offer people in distress to lower their activation and regulate the nervous system. There are many different paths toward healing. One size does not fit all. A resource needs to be tailored to the needs of the individual.

As the planet goes through a turbulent transitional period paving the way to the Aquarian Age, humanity can witness disastrous events, turmoil and other intense experiences. The transition from the Age of Pisces to Aquarius might feel like a traumatic birth that once endured will result in a glorious birth of a new consciousness with universal love at its core. 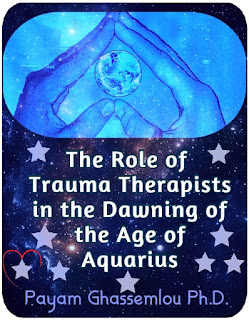