Authoritarianism and the Harm to Psychotherapy by Payam Ghassemlou Ph.D.

My journey of becoming a psychotherapist with a passion for serving the LGBT community started over three decades ago. In those days, AIDS was devastating our community, and I wanted to make a difference. I started my counseling internship at the Los Angeles Gay and Lesbian center with a focus on helping people living with HIV/AIDS. As I look back on my journey of studying psychology and becoming a psychotherapist, I am realizing an obvious point. I learned how to practice psychotherapy in a democratic society. This is a crucial point because the kind of society where mental health services being offered makes a substantial difference.

Given my experience with living or visiting other parts of the world, especially in places ruled by authoritarian regimes, I have learned psychotherapy can be a transformative process when practiced in a free society. It is difficult to help individuals reach their true potential in a closed society where fear dictates people’s lives. In places where freedom of speech is protected, it is much easier to openly discuss all external events that can impact a client’s mental health including relevant sociopolitical issues. For example, in my Los Angeles based counseling practice, I have helped many people from all walks of life including lesbians, gays, bisexuals, transgenders, and queer or questioning people to become comfortable with their identity. Learning how to love themselves despite their homophobic and transphobic upbringing has been transformative. Practicing psychotherapy in a free society makes it possible to validate my client’s pain regarding homophobia, transphobia, sexism, racism, xenophobia, Islamophobia, anti-Semitism, classism, ableism, and other degrading situations. The safety to openly discuss and condemn such obstacles is necessary for many clients’ healings process. Those of us who are trained in somatic psychotherapy and have studied the impact of trauma on the autonomic nervous system, know how hateful acts can dysregulate the nervous system. In a free society, it is much easier to help the body and mind to heal from the impact of trauma.

Since the Trump Presidency and all the divisiveness and rampant polarization that came with it, I have noticed a troubling shift in American politics. For me, the notion that someday there would be a competition between democracy and autocracy in the Unites States of America was unthinkable. Especially as a foreign-born gay man who found America as a safe refuge. I cannot imagine the possibility of living under authoritarian regime again. I know how precious democracy is because I have experienced how oppressive autocracy can be. Now, my nightmare about autocracy over democracy is beginning to feel real. The other day I found myself defending voting rights talking to another therapist who believed voting is a privilege and not a right. Moreover, I have spoken with many Fox News viewers who are willing to shift toward autocracy if such a regime would ban abortion, uphold conservative values, and keep non-White immigrants out. They do not realize what is it like living in autocratic countries like China, Russia, and Iran where people are miserably oppressed. Autocratic leaders do not care about issues like human rights, climate change, and the freedom of press. They lock up or execute anybody who challenges the way they govern. I understand the U.S. is considered a republic and not a democracy. However, no matter how I define it, America, unlike an autocratic country, makes it possible for a psychotherapist like me to provide a socially responsible way of practicing psychotherapy.

Despite of all the positive elements that make this country great, many of us are noticing disturbing situations that are jeopardizing our freedom. For example, some U.S. Supreme court judges were nominated by presidents who did not win the popular vote. These conservative judges, who do not represent the American majority, are making decisions that are negatively impacting our lives. Also, the continued use gerrymandering coupled with the voting restrictions in various states is paving the way toward totalitarianism. Many mental health therapists are concerned about the future of psychotherapy and its transformative potential as American democracy erodes. If the anti-democratic trend continues, and our freedoms keep getting chipped away, it would be only matter of time before they start policing our counseling profession. Some of us already are being restricted and controlled by some health insurance companies for greed and profit. Once a dictatorial system of government begins to dominate the U.S., it will have major impact on how we conduct psychotherapy. For one thing, I will not feel safe to freely explore how clients’ emotional pain might have something to do with the environment they live in. Also, since the mental health of the individual and sociopolitical factors are deeply intertwined, how a country is being run can impact people’s well-being. The stress of living under an authoritarian rule can lead to depression, anxiety, hopelessness, low self-esteem, and suicidal thoughts.

I hope I am wrong about U.S. democracy being replaced by an autocracy which could negatively impact the delivery of therapeutic services. Before the events of January 6, 2021, when a racist mob attacked the United States Capital, I would not have entertained the notion that U.S democracy is at risk. Now, I do. The events that led up to January 6, and the role that many far right politicians played to shape such assault on U.S. democracy has made many freedom lovers in this country alarmed. Many Americans do not feel safe knowing a major portion of the population are manipulated to believe a strong leader, who does not have to worry about oversight from Congress and elections, is good for them. Many of them believe a strong Caucasian leader can protect their European heritage, which is central to their identity, from cultural diversity. Moreover, some believe a forceful leader can protect their so-called Christian values. Some uneducated low information voters believe a Putin-like leader is necessary to stop homosexuals from turning their children gay and imprisoning doctors who provide abortion services. These individuals, who are brainwashed by right-wing media to believe in such absurdity, are part of our current problem with the rise of autocracy in the U.S.

When it comes to offering psychotherapy services, theoretical approaches are an integral part of the therapeutic process. Such theoretical approaches can provide a framework and guidance for therapists to help their clients. I believe, any psychological theories that teaches people to differentiate, and not remain a sheep in the flock is a threat to fascism or any type of dictatorial government. For example, a psychotherapist who utilizes feminist theory could have a tough time working under a fascist type of establishment since such theory focuses on gender inequality and discrimination among many other themes. Moreover, therapists who specialize in helping young people embrace their sense of curiosity, sexuality, and independence could become a threat to a system of government that thrives on repressive family structures, fear of authority, and sexual repression. Psychotherapy, as I know it, will change and therapists may no longer be allowed to help clients in cultivating a free mind. We could lose our freedom to choose our theoretical orientation when America becomes one of those autocratic countries, and any books including psychology books that are not ardent in its support of dictatorial government may be burnt.

As a cis gender gay man of color, I understand we currently have a lot of problems with racial injustice, sexism, homophobia, and transphobia in America, especially, for African Americans who have suffered so much from racial inequality. As of now, we are not a fascist state yet. I hope everyone including mental health professionals who care about freedom of speech and the right to free elections take the current push toward autocracy very seriously. Far-right hate groups in America have gotten stronger. Once we completely lose our precious American freedoms, everyone including psychotherapists may be required to adjust to the authoritarian order and submit to it. I hope that day never comes. There is still time to save American democracy. 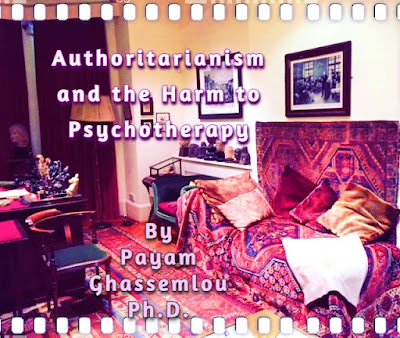